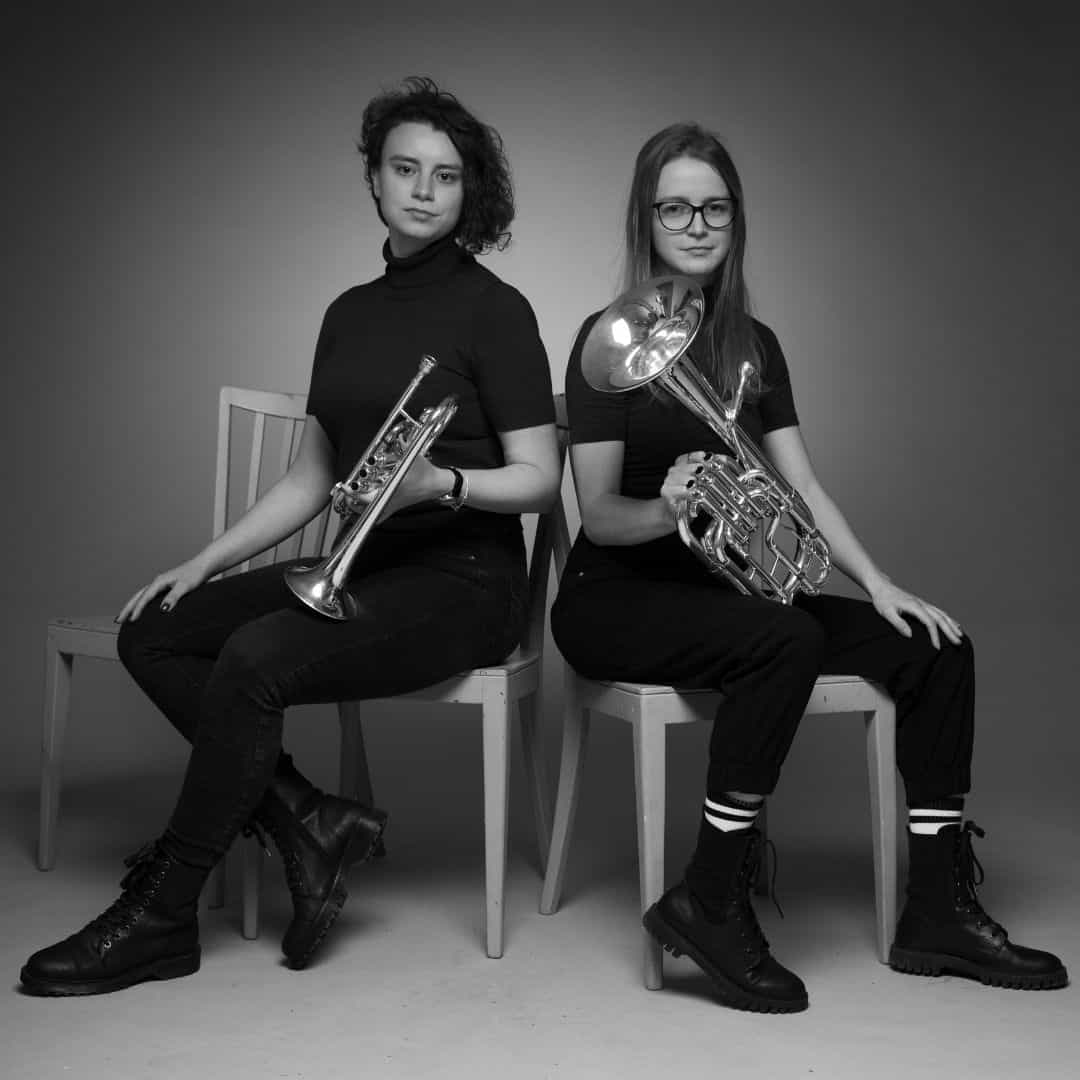 As you know we love to speak to musicians all over the world, and we often find that people have started playing an instrument because their family were musical. Today we speak to sisters Medeina and Amanda Vapsvaite in Lithuania about their musical journeys…

When did you start playing, how did you get into music?

M: My dad started a band the year I was born, and ever since I was able to talk, I always said I would never play in a band, although all the band members was and is my family and close friends! My sister started playing when I was 3 or 4 years old and she would bring her cornet home after rehearsals and I always tried to play it. Fast forward when I was 8 years old, on one summer day I decided, that I would like to learn how to play one piece, that I really liked at the moment and went to my dad and said – Give me the instrument! So he gave me tenor horn and we have been  inseparable ever since.

A: I started to play the cornet when I was 6 years old. My first teacher was my father, he was a French horn player, and started a Brass Band in our village, he is still conducting the band.

Which band/orchestra do you play in and how do you get involved?

M: I play in Brass Band “Sklepučini” which I have played in ever since I started. For the first few months I played and learned mostly by myself, I only asked my dad which valves to press on certain notes. After some time, I got in the band and played 2nd horn part for a few years, and after that I got the Solo Horn part which I still play now.

M: Usually I practice 1-2 hours every evening after work.

A: When I was studying I used to practice at least 3-4 hours a day, plus rehearsals. Now I have graduated I try to practice every day at least 2 hours, but its always depends on my concentration. Also I have rehearsals 3 times a week so I try to focus on practicing more on technical studies the days I’m free from rehearsals.

M: First things first, I always learn my sheet music, to build my confidence. Its also important to participate in general band preparation for all the concerts and championships and to feel the encouragement from your colleagues.

A: Usually I keep valve oil on stage so if it’s necessary I can use it. I always have all parts ready and in order couple days before the performance. I learned to practice at the time when I have the concert, for my body to get used to playing late in the evening if I used to practice early in the morning. Good warm up before going on stage is important so I warm up in the morning, have a break, and do a short warm up before the concert.

What do you need to take with you (must haves, lucky charms etc!)

M: My lucky charms are my colleagues, they bring me confidence and support, put me in a good mood and most important make the performance memorable.

A: I don’t really have any lucky charms, but with the band before the contest we have tradition to stand in the circle together, keep each other hands and close eyes, to relax.

What is your best musical memory? Do you have a favourite place to play?

M: Throughout 14 years of playing in a Brass Band I made a lot of memories. The best memories are mostly from trips to other countries such as Norway, Poland, Germany and some others. We had a lot of bonding experience and quite a few championships, from which we came back with prizes.

My Best musical memory was when I had the opportunity to play in EBBC 2019 in Switzerland with Lithuanian Academy of Music and Theatre band “LT Brass” conducted by Russel Gray. To be on that stage and perform to so many music lovers was awesome – my favourite place to play is in the hall where I’m rehearsing with my band, as I am so used to the acoustics and the environment.

A: For me it is when I participated in the European Youth Brass Band in Lille, France. I think every young musician should do it. The feeling when you can play in Gala Concert with top musicians, the feeling you get from the audience in fantastic.

My favourite place to play I think it is the hall where I learned to play as it’s comfortable for me. I know how loud or soft I can play, I know the acoustics, when I play I feel like I’m alone with the band.

M: My motto is to never be afraid to ask questions till you get it. I know music theory is tricky sometimes and the most important thing is understanding, that consistency is the key.

A: Start playing in a band, not just in school, you will get new experience, lots of concerts. And most importantly get new friends, family and fun. 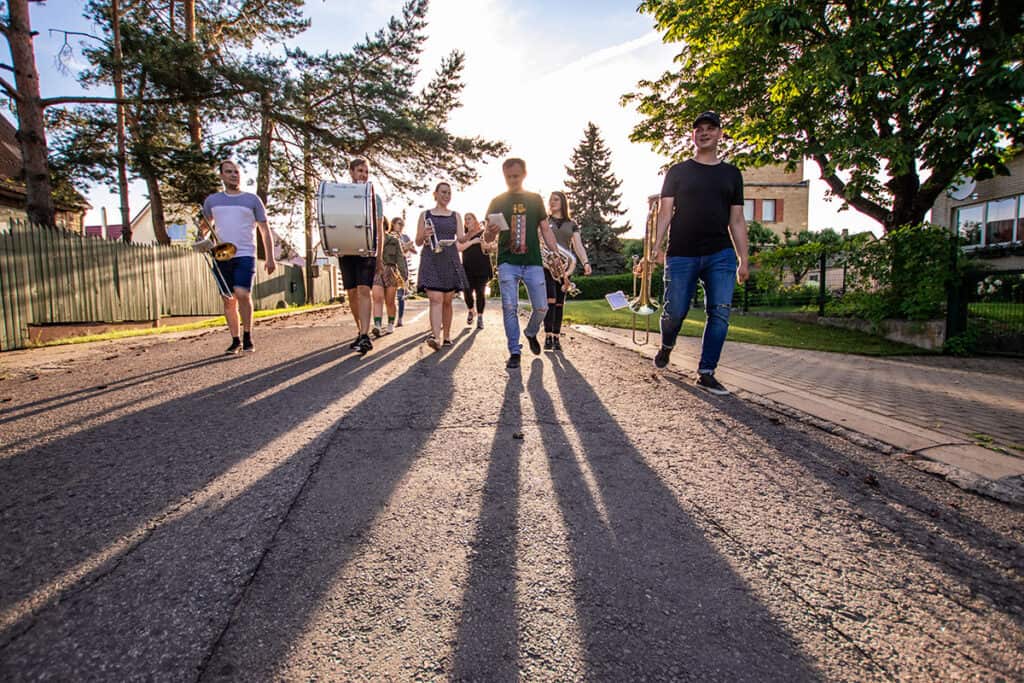 A: I play a Prestige Cornet Mouthpiece – silver plated body with gold cup and rim size 2.

M: All my life I thought that music would be a hobby, but in the past year I decided I would like to try out musicians path so I’m planning on applying to Lithuanian Academy of Music and Theatre to specialise in tenor horn after I finish my current Business Management studies. I still don’t know which path I will choose, but one thing I know for sure – I won’t let go of my tenor horn for a long time!

A: I would like to participate in new projects, maybe organise some new projects too 😊. Also I started to conduct a band in school, so I hope it will grow up with me and will be a nice school Brass Band.

A: I think I need to practice more piano and singing, to be able to sing the parts for students and play the piano for myself.

What is your favourite thing about music?