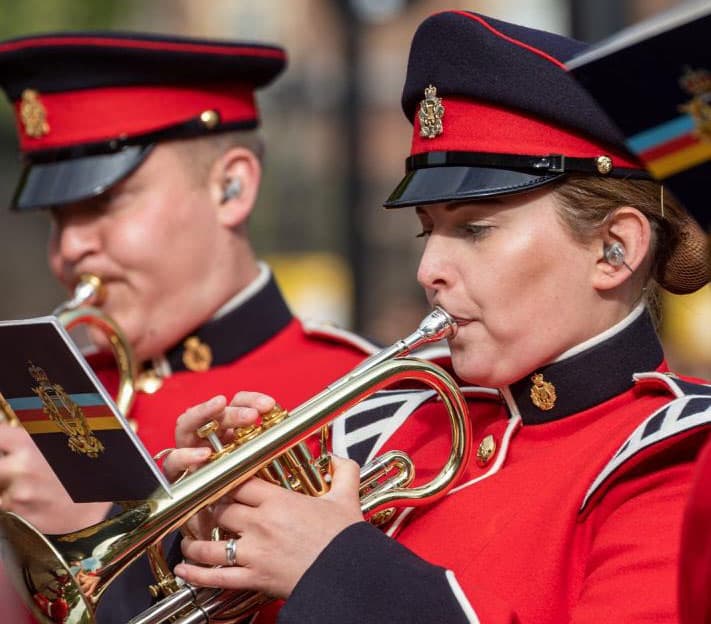 A month on from the state funeral of Queen Elizabeth II we spoke to Louise, a musician in British Army Band Tidworth, about what playing at this momentous occasion meant to her.

What was your journey from picking up a cornet to playing at the Queen’s funeral?

I started playing the trumpet at school when I was 8 and enjoyed it so much when I reached sixth form I decided I’d like to make music my career. I studied trumpet at Birmingham Conservatoire for 4 years and it was during this time I discovered the brass band scene and started playing cornet too. I went on to study for a Masters at the Royal Northern College of Music where I was perfectly placed in ‘brass band country”. In 2019 I relocated to Tidworth with my husband and took the plunge to join the Army! I’ve been playing with British Army Band Tidworth for almost two years now and I think it is such a fantastic opportunity – how many other people can say they play full-time in a brass band and get paid for it?!

What was the selection process that led to you playing on the day?

The funeral was such a huge event and so meticulously planned that naturally all the Army bands were involved. British Army Band Tidworth’s job was to march the street liners onto Horse Guards Parade and then remain standing there as the funeral procession went by – we were a small cog in a very big wheel!

What did the preparations for the day involve?

The band had to stay on a training camp for a week to allow us to attend rehearsals, and our accommodation was basic to say the least! Our part in the whole event was relatively small, there was a lot of hanging around during rehearsals, so a sense of humour was definitely required. It was fascinating to see everything coming together over the week with personnel from across the services and even international forces taking part.

What impact do you think the day had on you?

Although I felt very privileged to be a part of the funeral it definitely took its toll on all of us – long hours in rehearsal and then no promise of a good night’s sleep afterwards! I think it was a great exercise in working under pressure, while tired, and having to remain flexible because our schedules were changing by the hour! Our part in the procession involved standing still for over two hours so there were definitely some sore feet afterwards. However, I do firmly believe this was one of the biggest events I will ever take part in in my army career and one I will always remember.

How does it affect your chops having to play on the march?

On this particular occasion there wasn’t a lot of music so I didn’t have any lip issues but during the summer the band took part in some very long parades – I find it’s all about learning to box clever and working as a team. The cornet section is large so we can all play at a slightly lower dynamic, take a few bars off where needed and share the load as much as possible.

Is it difficult to play properly in all weathers?

As a brass band we’re a bit more weather proof than a wind band! There’s definitely a downside to playing in most weather conditions though, whether that be sweating in a heavy uniform in summer, numb fingers in the winter or trying not to lose your hat and music on a windy day. But it’s just part of the job so we all do our best.

Did you have a chance to rehearse in situ?

There was what was referred to as the “Early Morning Rehearsal” – and imagine our reactions when we found out that meant 2.30am! We left camp at 8pm so we could attempt to sleep at our base in central London before a full run-through of the whole event starting at midnight to coordinate the sheer amount of people involved. Marching onto Horse Guards Parade at 3am was such a surreal experience, to see a place that’s usually so packed with people completely empty. And it didn’t help that we couldn’t see our music!

Did you find it very emotional (given the solemnity of the occasion) or was everybody just focused on doing a really professional job?

To be honest, I think a lot of us were focused on staying upright and keeping the blood flowing to our feet! The band’s part in the whole day was relatively small but there were TV cameras everywhere so it was so important that we looked as smart and professional as possible. It was an emotional moment as the Royal Family passed by, I think that brought home the human element that this was actually someone’s mother, grandmother and loved one. It was a great honour to take part in something so monumental alongside a team of fantastic musicians and colleagues

Louise uses an Alliance 2 for cornet playing, an Alliance 3FL on flugelhorn, and 5 on trumpet. If you enjoyed reading about Louise, she can be found on Instagram: @louisetrumpet.