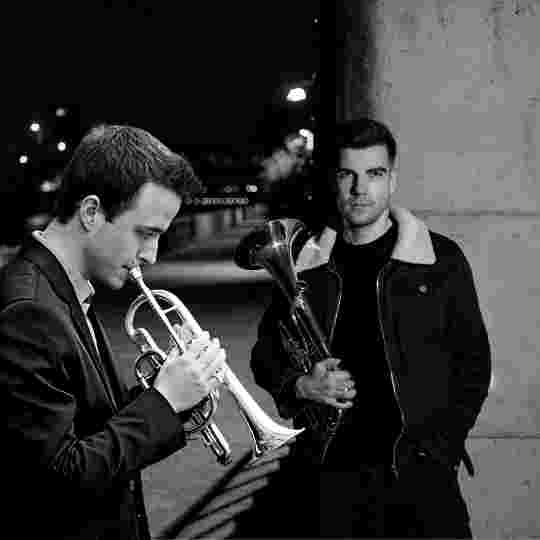 Last time we asked Richard, Les, David and Owen. This time we are posing the same questions to Tim and Lode, read on to find out a little more about them…

1. How old were you when you started playing?

Lode: I started playing at the age of 6, but my twin brother Jonas and I were immersed in the brass band world at a younger age. For example, once a week we went with our father to the Netherlands for the rehearsal with Brassband Limburg and we regularly went to a bar with Brassband Willebroek. At the age of 7 we already played in 5 orchestras, so you can say that I have been immersed in music all my life.

2. Why/how did you choose your instrument?

Tim: I actually wanted the biggest instrument they had after seeing players carrying a Bb Tuba; the brass teacher looked at my face (and at the structure of my lips) and decided that it would be the Tenor horn to start off with. I could change instruments when I was tall enough to make the change… whether they thought “never change a winning team” or they never really thought I became any taller, I never dared to ask 😂

Lode: My father started me on cornet. Although as a child I would rather have chosen soprano cornet or violin, he has always kept my feet on the ground.

3. What is your favourite musical memory so far?

Tim: Hard to choose one, but if I’d had to choose it would be playing solo horn for the first time with Brassband Willebroek at the British Open on Triumph of Time in the Symphony Hall Birmingham.

Lode: I was lucky enough to experience success with Brassband Willebroek at a very young age. When I played my first European Championships on 3rd cornet as a 12-year-old boy, the band immediately became European champion. There are many more memories, but the first will always stay the strongest.

4. If you could play anywhere in the world where would it be?

Lode: I have never been to Asia to play concerts there. It seems incredibly interesting, both musically and culturally, to travel to Japan once.

5. If you could listen to anyone else play an instrument (dead or alive) who would it be?

Tim: I would travel back in time and would go and listen to one of the true great Castrato singers. Today there aren’t any serious recordings of the real great castrates since (luckily) the practise was already forbidden before they had the opportunity to record music. Besides being extremely dangerous and often resulting in death, the practise when succeeded was also very unhealthy and created that the lack of hormones made castrates grow out of any natural proportions resulting (next to the high voice of course) in very big chest cavities. Nevertheless a large number of people attempted the procedure because of how successful it was in this period of time. It must have been something special, and since we cannot imagine today how it must have been. It triggers my imagination…

Lode: Sergei Nakariakov is one of the greatest musicians of the moment for me. What especially inspires me is that he constantly pushes the boundaries of the brass instrument and continues to expand them. He really knows no limits when it comes to musicality. He can perform a difficult passage that seems technically impossible on an instrument with incredible class, making him an all-round top musician.

6. What is the worst thing about the instrument you play?

Tim: The instrument isn’t widely known in the professional musical scene, there is almost no repertoire to play with symphony orchestra, therefore it is more limited for the classical scene.

Lode: The conical shape of the instrument allows you to create a unique sound. Here, however, you often encounter the limits of different timbres in the solo repertoire. It still remains a challenge for me to keep experimenting with different sound concepts in the different registers.

Tim: Because of the fact that it is limited, as a performer on tenor horn you need to be extremely versatile. We play in bands, chamber music, teach and conduct what makes us to more complete musicians. It is maybe a bit counter intuitive to say but being limited makes us more complete.

Lode: The best feature of the cornet is its unique sound. It inspires young and old who have never heard the instrument before. This sound concept allows you to convey an extensive palette of emotions to the listener.

8.What is your favourite mouthpiece of the Alliance collection and why?

Tim: Alliance Owen Farr Signature, this mouthpiece is a great combination for the highest quality in sound combined with an ease of playing all over the registers. The mouthpiece makes centred pitched playing so easy and provides a full and rich sound that I love to use as a soloist and in band playing.

Lode: I have tried many different mouthpieces in my career, but I ended up sticking with my current mouthpiece: the Alliance 3. For me, this mouthpiece offers an ideal balance between sound, register and flexibility.

9. What is your worst musical joke? (or story if you’re not a joke teller 😉)

Tim: Why did the pirate buy a Pavarotti Album? Because he loved the High C’s!

Lode: A story that stays with me from the European Championships in Freiburg 2015. Brassband Willebroek was about to take the stage and then I noticed that I no longer had my parts with me. It was a personal part, so sharing with my colleague was not possible and playing by heart was not an option at all.

A great sprint was started to the warm-up room, but no result. When I gave up completely sweating, I found my parts on a standing table in the central hall. I immediately ran back to the backstage where the band had already been instructed to enter the stage, here I was just in time and out of breath to start the performance!

10. Tell us a musical fact we might not know…

Tim: Adolphe Sax on inventing Brass instruments; Sax had two families of instruments – the Saxhorn family and Saxotromba family. At the time he was criticised by his colleagues for claiming he had invented the best brass instruments in the world – how could it be that both his inventions were the very best? There could only be ‘one’ very best right?

As a result of the criticisms he received Sax kept his saxhorns alive where he still missed the alto and baritone voice. He used the design of the Saxotromba Alto & Baritone and adapted this by shaping it more conically, giving it a deeper mouthpiece to fit his saxhorn group – the end result was a complete family of instruments.

Lode: Funnily enough. the cornet is not an invention of Adolphe Sax and there is still no known patent for the invention of the cornet. In a foreword by the horn player E.F. Dauprat to Joseph Forestier’s Method (Paris, about 1860) he said it was the manufacturer Jean-Louis Antoine (Halary) who had the idea to add valves on the post-horn des Allemands. After its evolution in France, the cornet soon reached England, where it was known for some time as the cornopean.

During the second half of the 19th century, countless special designs of the cornet appeared in tunings other than B flat. The main company in the 20th century was a factory in France, then called Fontaine Besson. The company worked closely with Boosey & Co and Hawkes & Sons. Together, these two companies were the main suppliers of the cornet. Nowadays however the cornet is often considered part of the collective name saxhorn, due to its conical base.